This post is about an arbitrary file move vulnerability I found in the Background Intelligent Transfer Service. This is yet another example of a privileged file operation abuse in Windows 10. There is nothing really new but the bug itself is quite interesting because it was hidden in an undocumented function. Therefore, I will explain how I found it and I will also share some insights about the reverse engineering process I went through in order to identify the logic flaw. I hope you’ll enjoy reading it as much as I enjoyed writing it.

If you don’t know this Windows feature, here is a quote from Microsoft documentation (link).

Background Intelligent Transfer Service (BITS) is used by programmers and system administrators to download files from or upload files to HTTP web servers and SMB file shares. BITS will take the cost of the transfer into consideration, as well as the network usage so that the user’s foreground work has as little impact as possible. BITS also handles network interuptions, pausing and automatically resuming transfers, even after a reboot.

This service exposes several COM objects, which are different iterations of the “Control Class” and there is also a “Legacy Control Class”. The latter can be used to get a pointer to the legacy IBackgroundCopyGroup interface, which has two undocumented methods: QueryNewJobInterface() and SetNotificationPointer().

The issue is that this call was handled by the service without impersonation. It means that users get a pointer to an IBackgroundCopyJob interface in the context of NT AUTHORITY\SYSTEM. Impersonation is implemented in the other methods though so the impact is limited but there are still some side effects.

When a job is created and a file is added to the queue, a temporary file is created. Once the service has finished writing to the file, it is renamed with the filename specified by the user thanks to a call to MoveFileEx(). The problem is that, when using the interface pointer returned by QueryNewJobInterface(), this last operation is done without impersonation.

A normal user can therefore leverage this behavior to move an arbitrary file to a restricted location using mountpoints, oplocks and symbolic links.

How do the BITS COM Classes work?

The Background Intelligent Transfer Service exposes several COM objects, which can be easily listed using OleViewDotNet (a big thanks to James Forshaw once again). 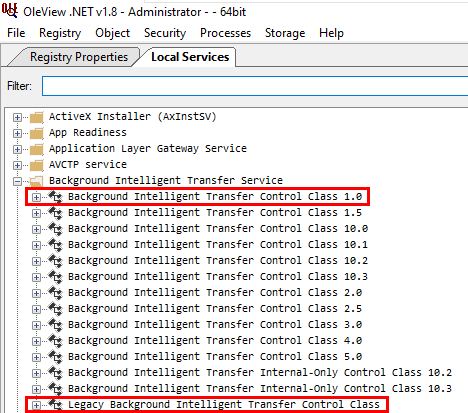 Although the BIT service runs as NT AUTHORITY\SYSTEM, all these operations are performed while impersonating the RPC client so no elevation of privilege is possible here.

The Legacy Control Class works a bit differently. An extra step is required at the beginning of the process.

Once again, although the BIT service runs as NT AUTHORITY\SYSTEM, all these operations are performed while impersonating the RPC client so no elevation of privilege is possible here either.

The use of these two COM classes and their interfaces is well documented on MSDN here and here. However, while trying to understand how the IBackgroundCopyGroup interface worked, I noticed some differences between the methods listed on MSDN and its actual Proxy definition.

The documentation of the IBackgroundCopyGroup interface is available here. According to this resource, it has 13 methods. Though, when viewing the proxy definition of this interface with OleViewDotNet, we can see that it actually has 15 methods.

Proc3 to Proc15 match the methods listed in the documentation but Proc16 and Proc17 are not there.

Thanks to the documentation, we know that the corresponding header file is Qmgr.h. If we open this file, we should get an accurate list of all the methods that are available on this interface.

Indeed, we can see the two undocumented methods: QueryNewJobInterface() and SetNotificationPointer().

The QueryNewJobInterface() method requires 1 parameter: an interface identifier (REFIID iid) and returns a pointer to an interface (IUnknown **pUnk). The prototype of the function is as follows: 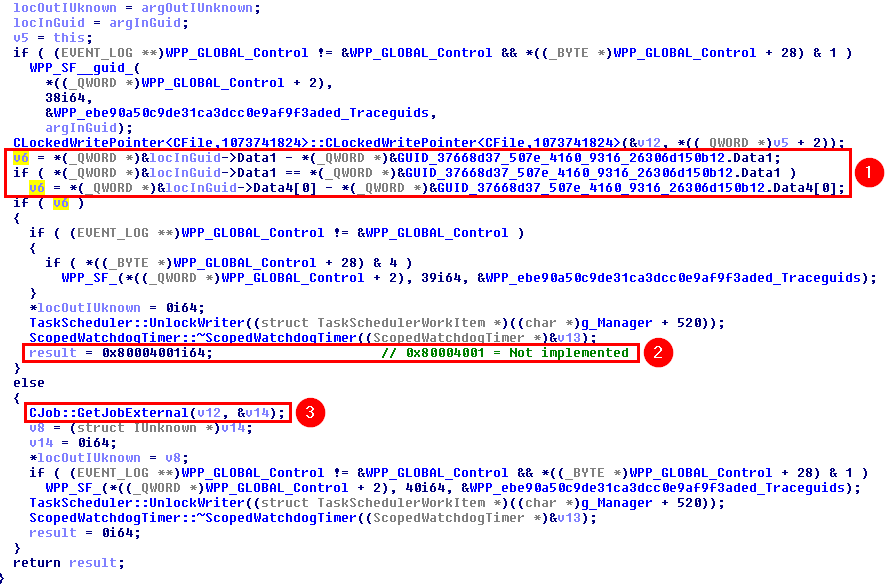 Before going any further into the reverse engineering process, we could make an educated guess based on the few information that was collected.

Therefore, we may assume that the purpose of this function is to get an interface pointer to the “new” IBackgroundCopyJob interface from the Legacy Control Class.

In order to verify this assumption, I created an application that does the following:

In this application, the target URL is \\127.0.0.1\C$\Windows\System32\drivers\etc\hosts (we don’t want to depend on a network access) and the local file is C:\Temp\test.txt.

Then, I analyzed the behavior of the BIT service with Procmon.

First, we can see that the service creates a TMP file in the target directory and tries to open the local file that was given as an argument, while impersonating the current user. 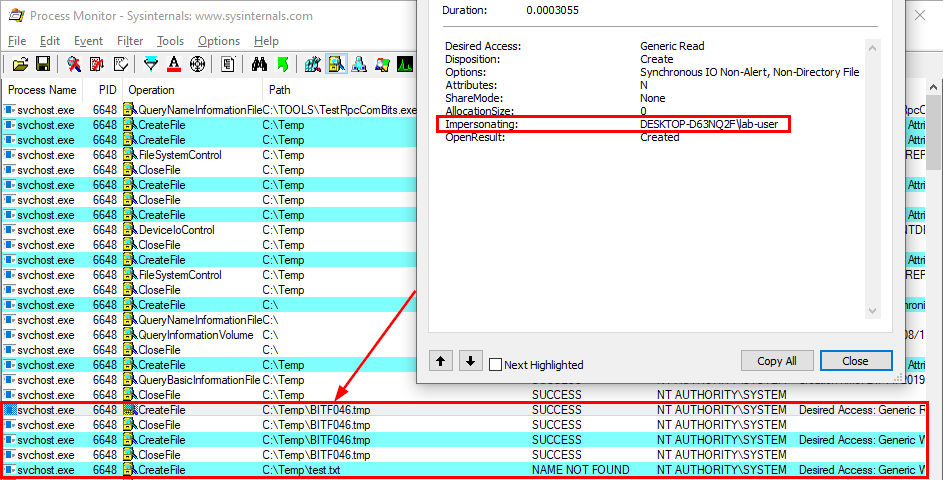 Then, once we call the Resume() function, the service starts reading the target file \\127.0.0.1\C$\Windows\System32\drivers\etc\hosts and writes its content to the TMP file C:\Temp\BITF046.tmp, still while impersonating the current user as expected. 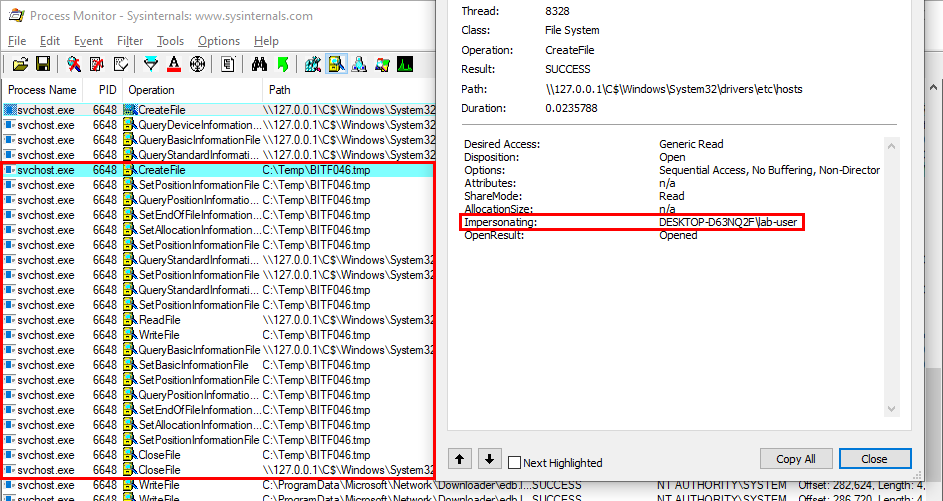 Finally, the TMP file is renamed as test.txt with a call to MoveFileEx() and, here is the flaw! While doing so, the current user isn’t impersonated anymore, meaning that the file move operation is done in the context of NT AUTHORITY\SYSTEM. 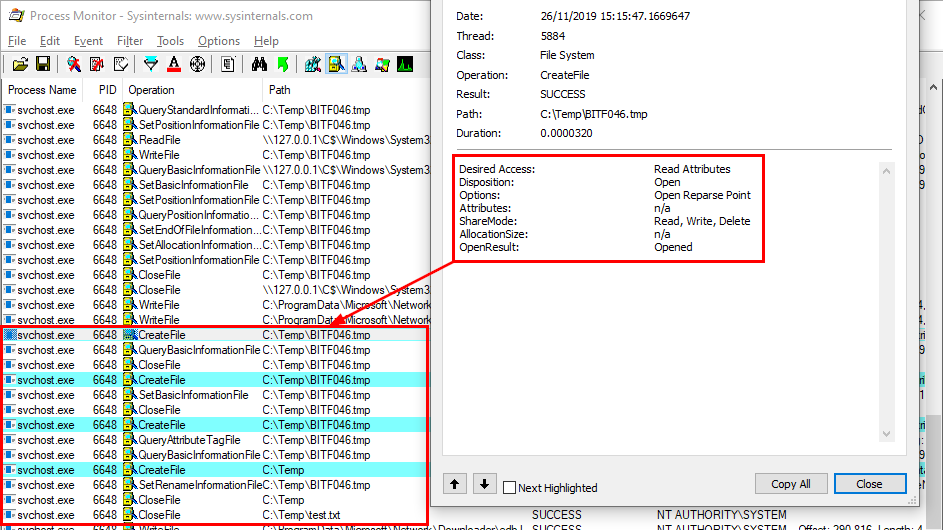 The following screenshot confirms that the SetRenameInformationFile call originated from the Win32 MoveFileEx() function.

This arbitrary file move as SYSTEM results in an Local Privilege Escalation. By moving a specifically crafted DLL to the System32 folder, a regular user may execute arbitrary code in the context of NT AUTHORITY\SYSTEM as we will see in the final “Exploit” part.

Before trying to find the flaw in the QueryNewJobInterface() function itself, I first tried to understand how the “standard” CreateJob() method worked.

The CreateJob() method of the IBackgroundCopyGroup interface is implemented in the COldGroupInterface class on server side.

It’s not obvious here because of CFG (Control Flow Guard) but this function calls the CreateJobInternal() method of the same class if I’m not mistaken.

The CheckClientAccess() method is where the token of the user is checked and is applied to the current thread for impersonation.

Eventually, the execution flow goes back to the CreateJobInternal() method, which calls the GetOldJobExternal() method of the CJob class and returns a pointer to the IBackgroundCopyJob1 interface to the client

The calls can be summarized as follows:

Now that we know how the CreateJob() method works overall, we can go back to the reverse engineering of the QueryNewJobInterface() method.

We already saw that if the supplied GUID matches IID_IBackgroundCopyJob, the following piece of code is executed.

That’s where the new interface pointer is queried and returned to the client with an immediate call to CJob::GetExternalJob(). Therefore, it can simply be summarized as follows:

Here is a very simplified call trace when invoking IBackgroundCopyJob::Resume():

Here is a very simplified call trace when invoking IBackgroundCopyJob::Complete():

So, when a IBackgroundCopyJob interface pointer is received from a call to IBackgroundCopyGroup::QueryNewJobInterface() and the job is completed by the service rather than the RPC client, the final CFile::MoveTempFile() call is done without impersonation. I was not able to spot the exact location of the logic flaw but I think that adding the CJob::CheckClientAccess() check in COldGroupInterface::QueryNewJobInterface() would probably solve the issue.

Here is a simplified graph showing the functions that lead to a MoveFileEx() call in the context of a CJob object.

How to Exploit this Vulnerability?

The exploit strategy is pretty straightforward. The idea is to give the service a path to a folder that will initially be used as a junction to another “physical” directory. We create a new job with a local file to “download” and set an Oplock on the TMP file. After resuming the job, the service will start writing to the TMP file while impersonating the RPC client and will hit the Oplock. All we need to do then is to switch the mountpoint to an Object Directory and create two symbolic links. The TMP file will point to any file we own and the “local” file will point to a new DLL file in the System32 folder. Finally, after releasing the Oplock, the service will continue writing to the original TMP file but it will perform the final move operation through our two symbolic links.

The idea is to create a directory with the following structure:

We’ll use the interfaces provided by the Legacy Control Class to create a new job with the following parameters.

Because of the junction that was previously created, the real path of the local file will be C:\workspace\bait\test.txt.

4) Find the TMP file and set an Oplock

When adding a file to the job queue, the service immediately creates a TMP file. Since it has a “random” name, we have to list the content of the bait directory to find it. Here, we should find a name like BIT1337.tmp. Once we have the name, we can set an Oplock on the file.

5) Resume the job and wait for the Oplock

As mentioned earlier, as soon as the job is resumed, the service will open the TMP file for writing and will trigger the Oplock. This technique allows us to pause the operation and therefore easily win the race.

We switch the mountpoint and create the symbolic links:

7) Release the Oplock and complete the job

After releasing the Oplock, the CreateFile operation on the original TMP file will return and the service will start writing to C:\workspace\bait\BIT1337.tmp. After that the final MoveFileEx() call will be redirected because of the symbolic links. Therefore, our DLL will be moved to the System32 folder.

Because it’s a move operation, the properties of the file are preserved. This means that the file is still owned by the current user so it can be modified afterwards even if it’s in a restricted location.

To get code execution as System, I used the arbitrary file move vulnerability to create the WindowsCoreDeviceInfo.dll file in the System32 folder. Then, I leveraged the Update Session Orchestrator service to load the DLL as System.