There was a weird bug in the DotNet Core Toolset installer that allowed any local user to elevate their privileges to SYSTEM. In this blog post, I want to share the details of this bug that was silently (but only partially) fixed despite not being acknowledged as a vulnerability by Microsoft.

In March 2020, jonaslyk told me about a weird bug he encountered on his personal computer. The SYSTEM’s PATH environment variable was populated with a path that was seemingly related to DotNet. The weird thing was that this path pointed to a non-admin user folder. So, I checked on my own machine but, although there was a DotNet-related path, it pointed to a local admin folder. Anyway, if the path of a user-owned folder can be appended to this environment variable, that means code execution as SYSTEM. So, we decided to work together on this strange case and see what we could come up with.

We started with a clean and fully updated installation of Windows 10. In this initial state, here is the default value of the SYSTEM account’s PATH environment variable. As a reminder S-1-5-18 is the Security Identifier (SID) of the LocalSystem account.

Then we installed Visual Studio Community 2019 (link). Once installed, we selected the .Net desktop development component in the Installer. 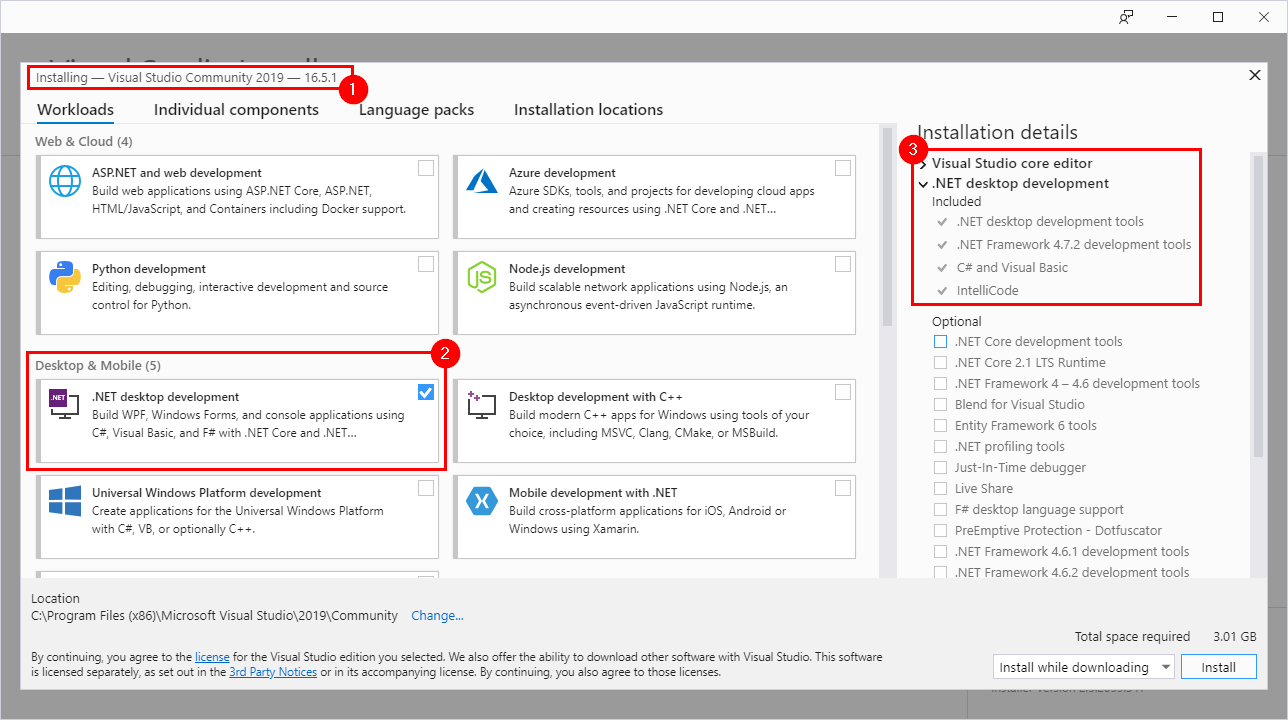 After clicking the “Install” button, the packages are downloaded and installed.

We are looking for a registry key modification so we can use Process Monitor to easily monitor what’s going on in the background. 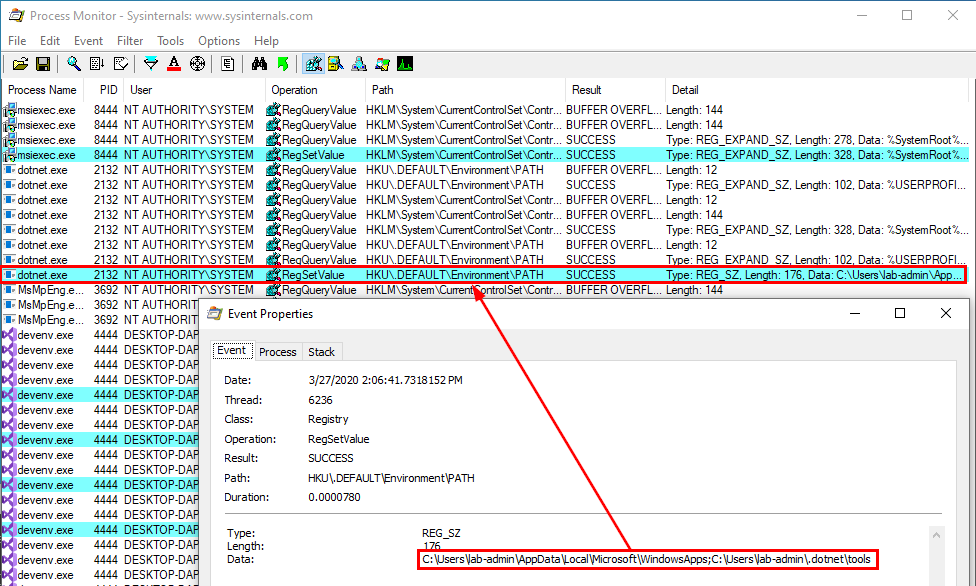 Things get interesting when the “.Net Core toolset” is installed. We can see a RegSetValue operation originating from an executable called dotnet.exe on HKU\.DEFAULT\Environment\PATH. After this event, we can see that the PATH value in HKU\S-1-5-18\Environment is indeed different.

In these two cases, the current user is a local administrator so the consequences of such modifications are somewhat limited. Though, they shouldn’t occur because they may have unintended side effects (e.g.: UAC bypass).

After reading this, you might have a feeling of déja vu. If so, it means that you probably stumbled upon this post by @RedVuln at some point: .Net System Persistence / bypassuac / Privesc. It looks like he found this bug almost at the same time Jonas and I were working on it. But there is a problem, all of this can be achieved only as an administrator because the installation of the DotNet SDK requires such privileges. Or does it?

In the previous part, we saw that the installation process of the .Net SDK had some potentially unintended consequences on the Path Environment variable of the SYSTEM account. Though, strictly speaking, this doesn’t lead to an Elevation of Privilege.

But, what if I told you that the exact same behavior could be reproduced while being logged in as a normal user with no admin rights?

When Visual Studio is installed, several MSI files seem to be copied to the C:\Windows\Installer folder. Since we observed that the RegSetValue operation originated from an executable called dotnet.exe, we can try to search for this string in these files. Here is what we get using the findstr command.

Great! We have two matches. What we can do next is try to run each of these files as a normal user with the command msiexec /qn /a <FILE> and observe the result on the SYSTEM account’s Environment Path variable in the registry.

Running the first MSI file, we don’t see anything. However, running the second MSI file, we observe the exact same operation which initially occurred when we installed the DotNet SDK as an administrator.

This time though, because the MSI file was run by the user lab-user, the path C:\Users\lab-user\.dotnet\tools is appended to the SYSTEM account’s PATH environment variable. As a result, this user can now get code execution as SYSTEM by planting a DLL and waiting for a service to load it. This can be achieved - on Windows 10 - by hijacking the WptsExtensions.dll DLL which is loaded by the Task Scheduler service upon startup, as described by @RedVuln in his post.

The exploitation of this bug is trivial so I will focus on the root cause analysis instead, which turned out to be quite interesting for me.

The question is: where do we start? Well, let’s start at the beginning…

We have a Process Monitor dump file that contains the RegSetValue event we are interested in. That’s a good starting point. Let’s see what we can learn from the Stack Trace. 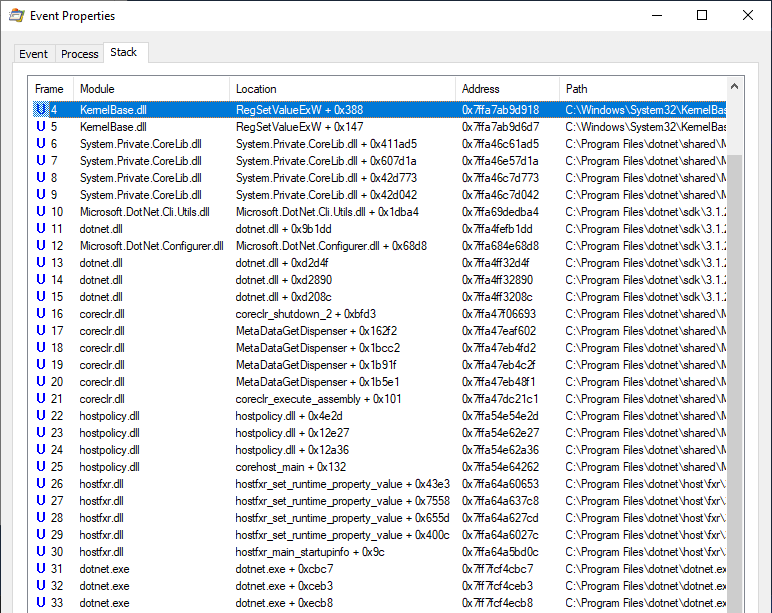 Looking at the details of the Process Start operation, we can see the following command line:

From this command line, we may assume that the Win32 dotnet.exe executable is actually a wrapper for the dotnet.dll assembly, which is loaded with the following arguments: internalreportinstallsuccess "".

Therefore, reversing this assembly should provide us with all the answers we are looking for:

To inspect this assembly, I used dnSpy. It’s definitely the best tool I’ve used so far for this kind of task. 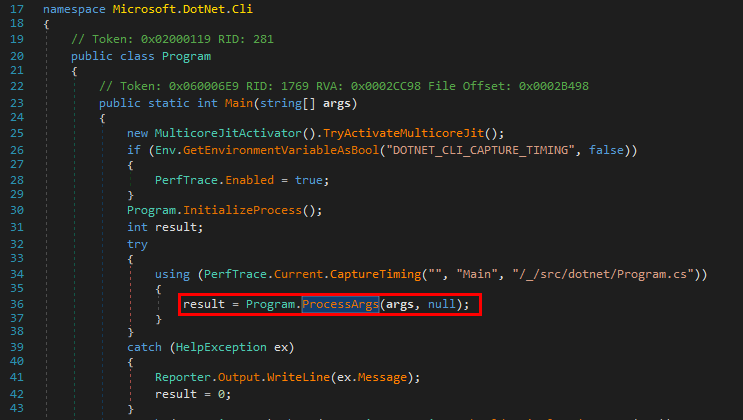 Several things happen in this function but the most important part is framed in red on the below screenshot.

Indeed, the function with the name ConfigureDotNetForFirstTimeUse() looks like a good candidate to continue the investigation.

This assumption is confirmed when looking at the content of the function because we are starting to see some references to the “Environment Path”.

The method CreateEnvironmentPath() creates an instance of an object implementing the IEnvironmentProvider interface, depending on the underlying Operating System. Thus, it would be a new WindowsEnvironmentPath object here.

The object is instantiated based on a dynamically generated path, which is formed by the concatenation of some string and "tools".

This DotnetUserProfileFolderPath string itself is the concatenation of some other string and ".dotnet".

The DotnetHomePath string is generated based on the value of an Environment variable.

The name of the variable depends on PlateformHomeVariableName, which would be "USERPROFILE" here because the OS is Windows.

To conclude this first part of the analysis, we know that the DotNet tools’ path follows the following scheme: <ENV.USERPROFILE>\.dotnet\tools, where the value of ENV.USERPROFILE is returned by Environment.GetEnvironmentVariable(). So far, that’s consistent with what we observed with Process Monitor so we must be on the right track.

Now, if we take another look at the details of the Process Start operation in Process Monitor, we can see that the process uses the current user’s environment, although it’s running as NT AUTHORITY\SYSTEM. Therefore, the final tools path is resolved to C:\Users\lab-user\.dotnet\tools. 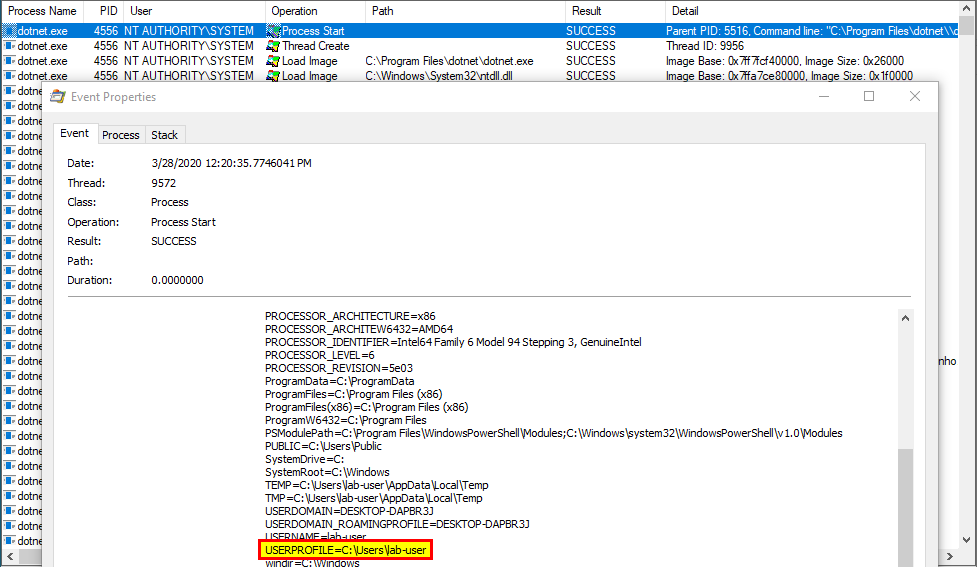 We now know how the path is determined so we have the answer to our first question. We now need to find out how this path is handled afterwards.

To answer the second question, we may go back to the Program.ConfigureDotNetForFirstTimeUse() method and see what’s executed after the CreateEnvironmentPath() function call.

Once the tools path has been determined, a new DotnetFirstTimeUseConfigurer object is created and the Configure() method is immediately called. At this point, the path information is stored in the EnvironmentPath object identified by the pathAdder variable.

In this method, the most relevant piece of code is framed in red on the below screenshot, where the AddPackageExecutablePath() method is invoked. 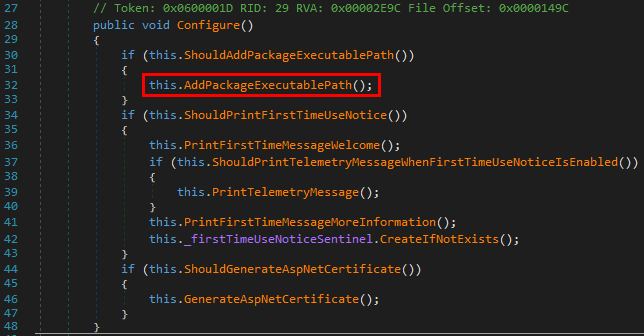 This method is very simple. The AddPackageExecutablePathToUserPath() method is called on the EnviromentPath object.

The content of the AddPackageExecutablePathToUserPath() method finally gives us the answer to our second question.

First, this method retrieves the value of the PATH environment variable but, this time, it uses a slightly different way to do so. It invokes GetEnvironmentVariable with an additional EnvironmentVariableTarget parameter, which is set to 1. 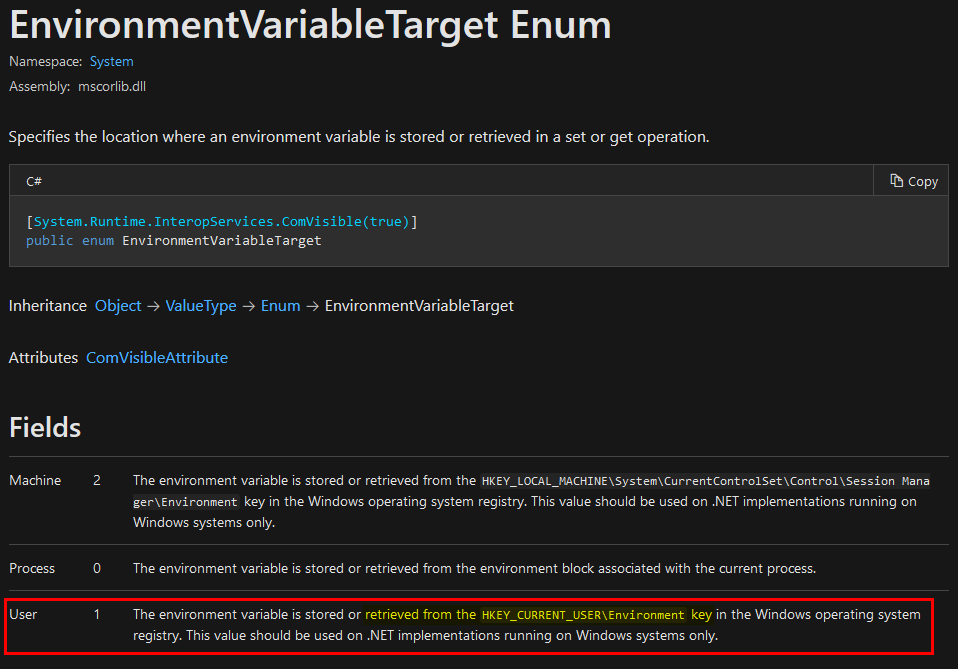 The problem is that this applies to the SetEnvironmentVariable() method as well. Therefore, C:\Users\lab-user\.dotnet\tools\ is appended to the Path Environment variable of the LOCAL SYSTEM account in the registry.

As a conclusion, the .Net Core toolset path is created based on the current user’s environment but is applied to the LOCAL SYSTEM account in the registry because the process is running as NT AUTHORITY\SYSTEM, hence the vulnerability.

The status of this vulnerability is quite unclear. Since it wasn’t officially acknowledged by Microsoft, there is no CVE ID associated to this finding. Though, as mentioned in the introduction, it has partially been fixed. Namely, the C:\Users\<USER>\.dotnet\tools path is no longer appended to the Path if you use one of the latest .NET Core installers.

Now, what can you do to make sure your machine isn’t affected by this vulnerability?

First, check the following value in the registry.

If you see something that is different from what is shown above, you may restore the default value using the following command as an administrator:

Then, you can update Visual Studio or the .Net SDK and check the registry once again. The “tools” folder should no longer be present.

Unfortunately, according to my latest tests, the %USERPROFILE% variable still gets resolved to the current user’s “home” folder. This means that the Path is still altered when installing the .Net SDK. Thankfully, this one cannot be exploited for local privilege escalation because the corresponding folder is owned by an administrator.