In the previous post, I showed how the USO client could be used to interact with the USO service and thus have it load the windowscoredeviceinfo.dll DLL on demand with the StartScan option. I wasn’t totally satisfied with this though. So, I reverse engineered a part of the client and the server in order to replicate its behavior as a standalone project that could be reused in future exploits. This is what I’ll try to show and explain in this second part.

Although I also used Ghidra during my research process, I’ll stick to IDA in this demonstration for consistency and because of its debugging capabilities.

Before opening usoclient.exe in IDA, I downloaded the corresponding PDB file with the following command. Theoritically, IDA will do this automatically but I found that it doesn’t always work. The PDB file can then be loaded with File > Load File > PDB File....

Note: PDB stands for “Program Database”. Program database (PDB) is a proprietary file format (developed by Microsoft) for storing debugging information about a program (or, commonly, program modules such as a DLL or EXE). Source: Wikipedia

usoclient.exe is now opened in IDA and the symbols are loaded, where do we go from here? Well, here the starting point is quite obvious. We know that the StartScan option is a valid “trigger” so, we will naturally look for occurrences of this string in the binary and enumerate all the Xrefs to find out where it’s used. 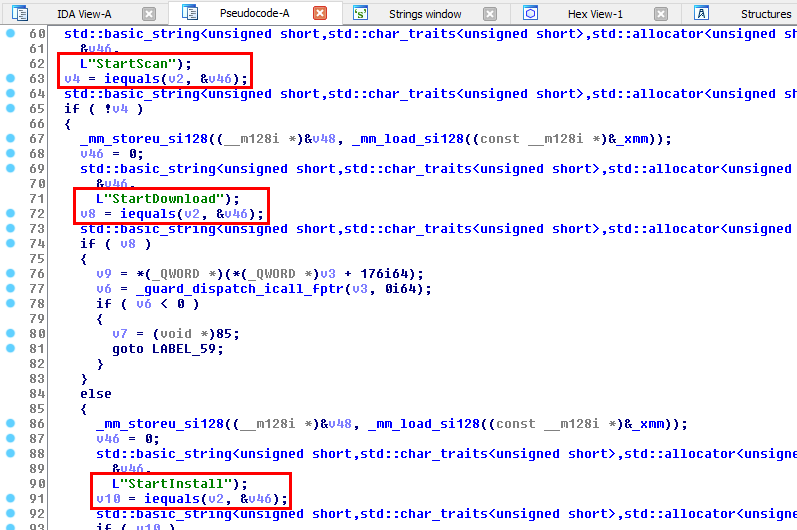 This seems to be a “Switch Case Statement”. The input is compared against a list of hardcoded commands: StartScan, StartDownload, StartInstall, etc. If there is a match, an action is taken.

For example, when the StartScan option is used, the following code is run.

This code doesn’t make much sense.

So, I considered it as a dead end for the moment and decided to go up instead by looking for Xrefs to this function.

This function is called only once so it’s pretty straightforward.

I then had a quick look at the pseudocode and I immediately spotted the following calls: CoInitializeEx(), CoCreateInstance(), CoSetProxyBlanket(), etc. Because I already played around with COM (Component Object Model) before, I recognized the sequence of API calls.

Let’s take a closer look at the following call.

According to Microsoft documentation, you can call CoCreateInstance() to create a single uninitialized object of the class associated with a specified CLSID (Source: CoCreateInstance function)

Here is the prototype of the function:

Having read the article Exploiting Arbitrary File Writes for Local Elevation of Privilege by James Forshaw several times, I knew what I had to do next. Thanks to his tool called OleViewDotNet, it should be quite easy to reverse engineer the DCOM object.

If you’re already familiar with this concept, you can skip the next part. For more information: https://docs.microsoft.com/en-us/windows/win32/com/inter-object-communication.

A quick word about (D)COM

As I said earlier, COM stands for Component Object Model. It’s a standard defined by Microsoft for inter process communications. Since I don’t know much about this technology myself, I won’t go into the details.

The key point to keep in mind though is how the communication between a client and a server is done. It is described on the following diagram. The client’s call goes through a Proxy and then through a Channel which is part of the COM library. The marshaled call is transmitted to the server’s process thanks to the RPC runtime and finally, the parameters are unmarshaled by the Stub before being forwarded to the server. 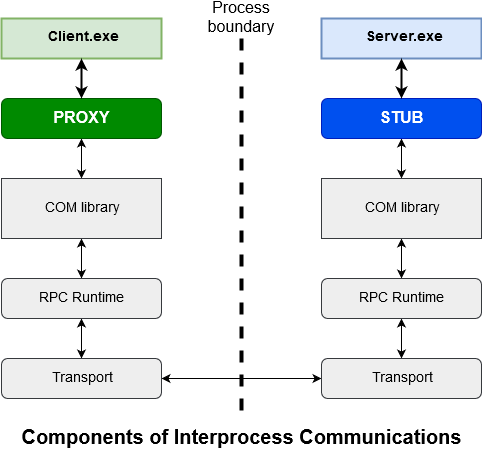 The obvious consequence is that we will find only the proxy definition on client side and, we might miss some key information from the server’s side.

Let’s start the reverse engineering of the COM object. We already know its CLSID so, using OleViewDotNet, this step should be straigthforward, right?

First we can enumerate all the objects exposed by the services running on the host by going to Registry > Local Services. Since we also know the name of the service, we can narrow down the list with the keywork orchestrator. This yields a few objects that we can inspect manually to find the one we are looking for: UpdateSessionOrchestrator. The CLSID matches the one we saw earlier while reverse engineering the USO client: b91d5831-b1bd-4608-8198-d72e155020f7.

The next step would be to expand the corresponding node in order to enumerate all the interfaces of the object. However, in this case it failed with the following error: Error querying COM interface - ClassFactory cannot supply requested class. 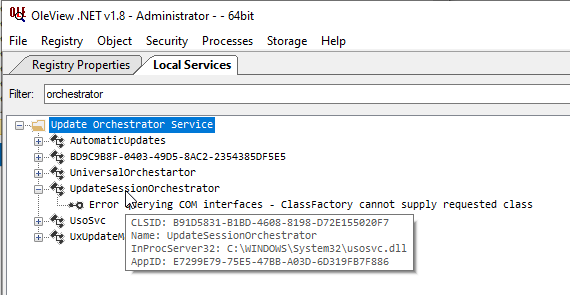 OK, never mind, we will have to do it manually. From this point on, I went for a dynamic analysis of the client in order to see how the RPC calls worked.

To do so, I used those three tools:

We already know that the CoCreateInstance() call is used to instantiate the remote COM object. As a result the variable pInterface, as its name implies, holds a pointer to the interface with the IID 07f3afac-7c8a-4ce7-a5e0-3d24ee8a77e0, which will be used to communicate with the object. My goal now is to understand what happens next. Therefore, I put a breakpoint on the first _guard_dispatch_icall_fptr call that comes right after.

Here is what happens right before the call:

We find the start address of the Proxy VTable of the UpdateSessionOrchestrator’s interface. We can then enumerate all the pointers listed in the VTable.

The first three functions are QueryInterface, AddRef and Release. These are the functions that a COM interface inherits from IUnknown. Then, there are 5 other functions but we don’t know their names.

Here is the complete VTable. We can see that the function at offset 5 is UpdateSessionOrchestrator::LogTaskRunning(ushort const *).

All this information can be summarized as follows.

If we consider the x86_64 calling convention of Windows, this can be represented by the following pseudocode.

The same process can be applied to the next call.

This would yield the following:

Here, the returned value is NULL so, all the code after the if statement would be ignored.

Therefore, we can skip it and jump right here:

Were are getting closer to the target PerformOperationOnSession() call.

With the same reverse engineering process, we find the following.

Here, we can see that another interface is involded: IUsoSessionCommon. It’s identified by the IID fccc288d-b47e-41fa-970c-935ec952f4a4 and its VTable has 68 entries so I won’t list all the functions here.

Next there is a CoSetProxyBlanket() call. This is a standard WinApi function that is used to set the authentication information that will be used to make calls on the specified proxy (Source: CoSetProxyBlanket function).

If we translate all the hexadecimal values back to Win32 constants, this yields the following API call.

Now, we can enter the PerformOperationOnSession() function and, we are back to the piece of code that didn’t make sense before. However, thanks to the reverse engineering process we just went through, this is now getting clearer. This is a simple call on the IUsoSessionCommon proxy. We just need to determine which function is called and with which parameters.

With this final breakpoint, the function’s offset and the parameters can be easily determined.

This would be equivalent to the following pseudocode.

If all the pieces are put together, the “StartScan” action in the USO client can be summarized with the following simplified code.

Knowing how the USO client works and how it can trigger privileged actions, it is now possible to replicate this behavior as a standalone application: UsoDllLoader. Of course, the transition from this reverse engineering process to the actual C++ code requires a bit more work but it’s not the most interesting part so I skipped it. The only thing that I should mention though is that the DiagHub PoC did help a lot.

Regarding the reverse engineering part, I have to say that it wasn’t too difficult because the COM client already exists and is provided with Windows by default. OleViewDotNet did help a lot in the end as well. It was able to generate the code for the second interface (UsoSessionCommon) - you know, the one with 68 functions!

Well, that wraps it up for this post. I hope you enjoyed it.